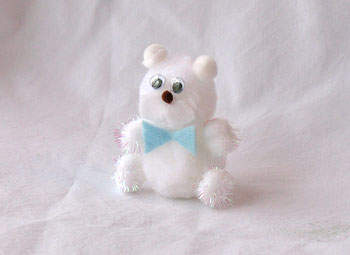 This cute little pom-pom polar bear is all ready for winter! This cuddly guy makes for a great winter craft, and is a cute addition to your homework desk or windowsill.

How to make it:

Before gluing the two large pom poms together, set them both on the table and see which one has a flatter bottom, then use that one as the body piece.
If you have trouble getting your bear to sit up, cut a circle from white cardboard and glue the bear to it, using it as a base.
Buy sparkly pom poms right after the various holidays when they go on sale.

Get the instructions for ––> Pom Pom Polar Bear